THE STARFISH WHO WENT TO LOOK FOR THE STARS

Ever since she could remember, the starfish had only ever had one thought in her mind: to find out why she was a starfish…

“The answer is simple…” said the Conger Eel, who lived in a deep dark hollow beneath a mountain of rocks and who was generally reckoned as knowing more about the ways of life beneath the waves than any other sea creature.

The Starfish was prepared to wait a long time for a reply because everyone said that the Conger Eel always took a long time to answer the questions he was asked, which was proof positive of wisdom and sagacity. In truth, being bored by a succession of the most trivial and stupid questions, he often fell asleep before getting around to answering…

On this occasion, however, the answer came instantly and was brief and to the point. “You are a starfish because you are called a starfish!” And with that, the Conger Eel promptly settled down to have another sleep.

“But why am I called a starfish?” the persistent Starfish demanded.

The Eel began to regret not having had his nap before answering the Starfish’s question, but trying not to sound too irritated, he elucidated.

“Because you are shaped like a star…” And, without waiting for the next question, he went on to explain that there was another world above the roof of the sea: a world that also had a roof which, at night, swam with great shoals of bright shining creatures who were shaped --- like starfish!

The Starfish was so entranced by this knowledge that she decided, there and then, to witness this amazing phenomenon for herself.

So that very night - when all the fishes and other sea creatures were asleep, hanging suspended, unmoving in the gently shifting current or hidden away among the waving fronds of seaweed or lying on or under the rocks - she swam all the way to the very roof of her world and looked up and saw, vaguely and a long way off, what she felt sure were the lights that the Conger Eel had told her about…

Because it was hard to see clearly, the Starfish decided to swim further in-shore and eventually reached a part of the sea where the distance between the sandy floor and the roof was hardly anything at all and very soon, she found herself half-in and half-out of her world and for the first time could fully see the star creatures suspended from the dark, blue-black roof above…

“They must be sleeping, too,” she thought and decided that she would wait to see if they would wake up and begin swimming about.

Too late, the Starfish realised that she was out of her element and, being unable to return to her own world, must now surely die…

Dying, as it turned out, was long and painful, but, just before she finally dried out, stiffened and lost consciousness, she saw something so wonderful, it almost took the unbearable pain away: one of the star creatures suddenly broke free from the shoal floating in the darkness and swimming fast and free through its sleeping companions plummeted into the blacker-than-black line that marked the point where the roof of this strange dry world met the roof of the sea… 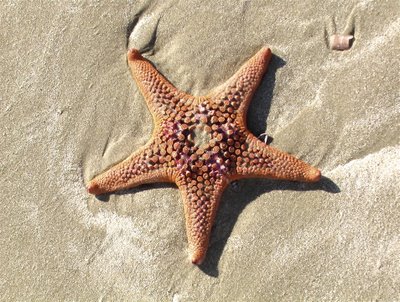 The next morning, a young child running on the beach found a dead starfish that had been washed up and stranded by the tide.

“Look!” said the child’s mother, “It looks just like a star!”

The child looked pitying at its parent. “It looks nothing like a star,” it said contemptuously, “A star is an incandescent body comprising a sphere of hot gasses held together by its own gravitation and emitting light, energy and electromagnetic radiation drawn from thermonuclear reactions in it’s interior!”

On hearing this, the soul of the starfish - skipping through limitless galaxies unseen in the light of day - emitted a celestial laugh…