THE BEAR WHO BEHAVED LIKE A BEAR WITH A SORE HEAD 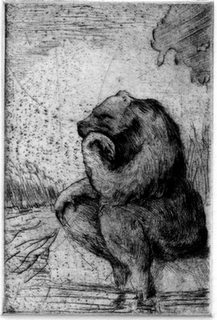 “You drive me CRAZY!” screamed the Female Bear. "I mean C R A Z Y ! ! You lounge around all day doing nothing, saying nothing and then snore and fart all though the night! And what happens when I point out that we’ve nothing in the cave to eat? You go out fishing, are gone for hours and hours and hours on end and catch what? NOTHING! Or you go off looking for honey, are missing for what seems like days and come back with what? NOTHING! Apart from a mass of bee-stings that you spend the next week scratching to death! And if I so much as even open my mouth, utter even the merest word of complaint, suggest that your behaviour is less than perfect, you stomp about, growling and grumbling like the proverbial bear with a sore head! Oh, but my mother was right! I was a FOOL to have ever gone into hibernation with YOU!”

The Male Bear said nothing; he simply picked up a very large rock and brought it down on his mate’s cranium with a sickening, skull shattering---

“There!” he said with what might have been a growl or could have been a laugh as he shambled out of the cave and off into the woods to join his mistress, “Now I’m not the only bear with a sore head!”

THE CAT WHO GOT THE CREAM

There was a cat - a pitifully pampered pet - who, if you had looked at him, you would have said had that smug, self-satisfied look of a cat who had got the cream. And, indeed, he had.

In truth, he got the cream every day - and twice-a-day on Sundays, high days and holidays! 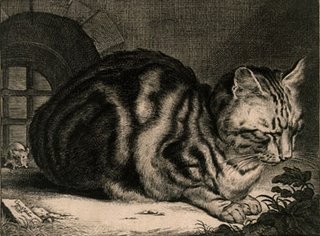 But, after a year or two of lapping up the cream and licking out the bowl, he rarely if ever relished the experience as he had once done when he was a kitten.

The special treat was now a commonplace event; the privilege, a right; the surprise, expected. And so, eventually, the Cat who got the cream looked less and less smug and self-satisfied and increasingly sated and bored with life.

Other cats - those who haunted dingy alleyways and seedy rubbish tips, living on rotting fish-heads and the rancid dregs from beer cans - had always envied the Cat who got the cream.

But they were rather less envious - and realised the true price of a saucer of cream - when their mollycoddled contemporary died, long before his time, of coronary heart disease resulting from an exceptionally high intake of high-density lipoprotein cholesterol.