THE GIRAFFE WHO STUCK HIS NECK OUT 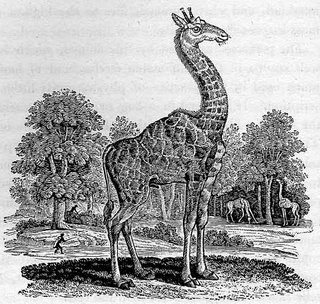 “I know I’m sticking my neck out,” said the Young Giraffe, “But those trees, way over there, look to me as if they are covered in really luscious leaves right at the very top.”

“What trees?” asked one of his elderly relatives.

“Trust me,” said the Young Giraffe, “with due respect, my eyesight is better than yours.”

So the whole herd followed the Young Giraffe and headed off for the trees, which were, even further away than they had at first supposed.

Although they began their journey almost as a canter, their speed soon dropped to a lope and, by the time they reached the trees, they were going at little more than a dawdle and were exhausted and very hungry.

They were pleased to discover that the trees were indeed covered in the most lip-smackingly luscious leaves at the very top of their branches. But unfortunately however far they stuck their necks out every single bunch of leaves was just beyond their reach.

As can be imagined, they were not best pleased with the Young Giraffe.

A few weeks later, the Young Giraffe coughed politely and said that whilst he was probably sticking his neck out once more, he could smell a waterhole full of fresh, clear drinking water off in the distance beside a large outcrop of rock.

“What rock?” asked another of his relatives.

“Trust me,” said the Young Giraffe, “I have a very keen sense of smell.”

Against their better judgement - and only because they were very thirsty - the herd agreed to follow the Young Giraffe to his waterhole.

After another long, tiring trek, they arrived at a muddy puddle at the bottom of a deep hole that was currently occupied by a bad-tempered and overweight warthog.

For the second time in too short a time, the Young Giraffe was not especially popular with his family.

A week or two passed and, one day when the giraffes were roaming the savannah, the Young Giraffe once again felt compelled to make an announcement.

“I know you are tired of me sticking my neck out,” he began, “but I really think that I can hear a pride of lions creeping up on us through the long grasses.”

“SHUT UP!!” shouted the giraffe family as one animal.

Feeling unbelievably humiliated, tears welled up in his big brown eyes and it was at that moment that the lions sprang!

The first animal to fall was the Young Giraffe, proving that if you keep sticking your neck out, sooner or later, you are going to get your head bitten off…