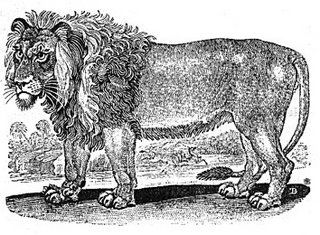 The Lion constantly complained about the fact that he never got the lion’s share. He knew that everyone always spoke about the lion’s share, but to the best of his knowledge, he hadn’t even seen a hint of it, let alone actually had it!

One day, he was lounging on the edge of the African desert considering how badly off he was compared with all those other lions who presumably got their due, picked up their rightful share.

“Who knows?” he muttered to himself, “For all I know they may have had my lion’s share, in addition to their own!”

At that precise moment, a Bald Ibis flew down and sat on a nearby boulder.

“What’s your complaint, O Royal and Regal One?” he asked in a highly deferential tone.

So the Lion told him…

“If that’s all that’s troubling you,” replied the Ibis, “I can fix that for you!”

“You can?” said the Lion in some surprise.

“I am the keeper of the magical mysteries of the ancient pharaohs and can easily grant a little wish such as yours. But, first, tell me: of what, in particular, do you want the lion’s share?”

“Food!” said the Lion without pausing to think.

“Anything else?” asked the Ibis.

“The affection of my lionesses,” he added, “and the respect of my cubs…”

“Is that it?” the Ibis enquired.

“Well,” went on the Lion, “good health, long life, peace of mind and freedom from worry…”

“All of that is possible,” responded the Ibis, “you have but to say the word and the lion’s share of all those things will be yours along with everything else!”

“Everything else?” queried the Lion.

“Most assuredly,” replied the Ibis.

“Then I would also have the Lion’s share of hatred, jealousy and malice; hunger and thirst; pain, sickness, grief and death…?”

“You choose well,” said the Ibis, “and in making that choice you reveal that when it comes to wisdom you truly do have the lion’s share!”