THE LEOPARD WHO GAVE UP SPOTS

The Leopard was, to speak frankly, an oddball and a misfit. He was the kind of cat who doesn’t run - let alone hunt - with the rest. If you spotted a leap of leopards crossing the veldt, he would be the one who leapt least or last or both.

The others urged him to conform, but he would have none of it. In fact, he grew more and more rebellious as time went by, to the extent of even regretting his beautifully inky spots.

At last he consulted the Ancient Dung Beetle, who was the wisest of all animals (because his knowledge of them was so basic) and who was greatly skilled in the deep, dark magic known only to a few in the animal world.

“What do you want?” enquired the Dung Beetle.

“I want to change my spots!” said the Leopard.

Showing no surprise, the Beetle asked “And what do you wish to change them for?”

“I wonder,” mused the Beetle, “do you think that’s altogether wise? After all, spots are spots and stripes are stripes and each have a purpose all their own.”

“Stripes!” repeated the Leopard. “Perform your deep, dark magic so that may be able to go around in black and white stripes!” 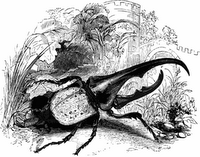 Unable to convince him to the contrary, the Beetle (who believed that every creature is captain of its soul) performed his deep, dark magic and the Leopard instantly changed his spots for black and white stripes.

The Leopard ran in his new coat, delirious with joy and his happiness was soon complete when the other leopards, who had never before had time for him, started running after him across the veldt. At last he was acknowledged as a leader amongst leopards, an individualist who lead rather than followed.

But his happiness was, unfortunately, short-lived: had he leapt with the other leapers and prowled like the other prowlers, he would have learned that spots and stripes are part of the code of survival. Each spot says ‘hunter’, ‘killer’, ‘eater’; each stripe says ‘hunted’, ‘killed’, ‘eaten’.

The other leopards knew their codes and saw life in simple terms. None of them thought that the zebra they chased that afternoon looked quite unlike the dozens of other zebra they had pursued to their deaths.

As the claws tore and the jaws ripped, the Leopard learned not just the true cost of non-conformity, but also that it is far better to die for a principle than merely for something as trivial as having a preference for stripes over spots.