THE OWL WHO KNEW EVERYTHING 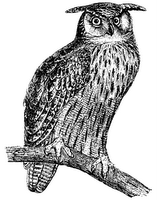 To begin with the forest creatures simply referred to him as “The Wise Old Owl”, without ever actually knowing how old or wise he was. But then that, of course, is precisely how reputations are made.

Every evening (which was the beginning of the Owl’s day) a queue of animals could be seen at the bottom of his tree, waiting for him to emerge and dispense wisdom and knowledge.

Whatever they asked him, it seemed, he would have an answer. No question was too trifling or too profound for his expertise. True, there were times when his answers proved challenging - even difficult - for the less intellectual creatures such as shrews and moorhens. But, by and large, everyone accepted that if anyone knew SOMETHING about ANYTHING, it was the Owl.

And so, by degrees, his fame spread and more and more animals visited his tree. Before long they started referring to him as “The Wisest of the Wise” and it was now commonplace to hear it being said that Owl knew EVERYTHING about EVERYTHING.

The Owl, who should have known better, began to believe his own publicity and it eventually proved to be his undoing.

One night, an elderly Fox - who was to mendacity and deception what the Owl was to wisdom and knowledge - came for a consultation. He insisted that his enquiry was of a particularly intimate and personal nature and that, if the Owl would do him the courtesy, he would prefer to discuss it in private without broadcasting his concerns to the rest of the forest.

Now the Owl, who had become increasingly self-important, was mildly flattered by this approach and so shooed the other creatures away and flew down to the ground in order to be able to talk to the Fox in privacy. 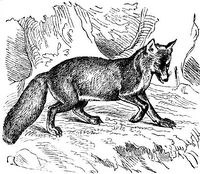 “Tell, me,” said the Fox in a sly voice and with a twitch of his rusty-red brush, “what do foxes eat?”

“Ah,” responded the Owl, “that is very simple, and surely you must know the answer to that question for you are no cub! Foxes eat rabbits and mice and other little creatures commonly found in field and hedgerow, but also have a penchant for chickens and geese.”

“Do they ever eat any OTHER birds?” asked the Fox.

“Not to the best of my knowledge,” the Owl replied, “and, as you are aware, I know EVERYTHING about EVERYTHING!”

“Certainly,” the Owl continued, “But, of course, if you can enlighten me to the contrary, then I shall be glad to add the information to my ever-growing storehouse of wisdom.”

So the Fox opened his jaws - revealing a great many, extremely unpleasant, teeth - and with one bound and, with a fair amount of munching and crunching, he duly enlightened the Owl…

Wiping his whiskers, the Fox reflected that whilst a little learning is undoubtedly a dangerous thing, a LOT of learning can, on occasion, be downright fatal!

[Images: Clipart Etc]
Posted by Brian Sibley at 9:50 AM