THE WISDOM OF LONG EARS 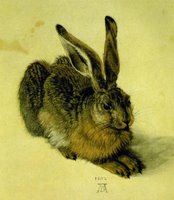 The Rabbit was sitting quietly in the sunshine nibbling away at some very juicy grass when a furious argument broke out between the Hippopotamus and the Lion. The Hippopotamus stoutly maintained that since he had the largest mouth of any of the animals, it naturally followed - as night follows day - that whatever he said was more important than anything said by anyone else.

The Lion, on the other hand, loudly argued - with many ferocious snarls - that since he possessed what was, unquestionably, the loudest roar in the jungle, it was necessarily the case that what he had to say was of far greater significance.

The argument went on like this for many hours and became so noisy that it woke up all the other animals - even the Sloth who was the soundest sleeper imaginable. One by one (or, if they knew their Bible, two-by-two), they wandered away into the bush so as to get a bit of peace and quiet.

Only the Rabbit remained, quietly munching his grass.

Eventually, when both the Lion and the Hippopotamus realised that their dispute was getting no nearer being resolved, they decided to appeal to the Rabbit, since he alone had heard all the points of view and all the reasoning, back and forth.

“Who is right?” roared the Lion.

“Which of us is correct?” bellowed the Hippopotamus.

“About what?” asked the Rabbit looking up for the first time.

“About our argument!” demanded the Lion.

“What argument?” asked the Rabbit.

“You’ve got the longest ears of any of us animals,” stormed the Hippopotamus, “you must have heard what we were arguing about!”

“It is true,” said the Rabbit. “I do have long ears and so I hear better than any of you. But that doesn’t mean that I am also obliged to listen…”