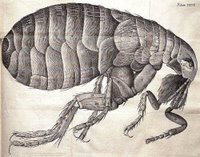 There was once a Flea who, for an invertebrate, was an inveterate social climber. He lived on the back of an old, fat, grey Rat in a farmer’s barn, but was deeply dissatisfied with his way of life and was always boring the other fleas with his dreams of getting on in the world.

One day his opportunity came when the farmer’s Dog (who was a lazy individual) decided to chase the only rat in the barn who looked too old and too fat to give him much a run for his money.

The Dog quickly cornered the rat and as his jaws clamped themselves around the rat’s neck, the Flea deftly jumped from prey to predator.

Life on the Dog was better than life on the Rat, but still the Flea wasn’t satisfied and soon another opportunity presented itself for social improvement.

The Farmer who owned the Dog took him foxhunting and whilst the Dog, being lazy, never got within a yard of catching the Fox, he and his master arrived in time to see the kill.

The flea judged his moment to perfection and in a series of calculated moves leapt from dog to dog and finally onto the brush of the unfortunate Fox, just as the leader of the hunt seized the corpse and held it aloft for the satisfaction of the assembled company.

The Flea was enjoyed a light snack of freshly drawn fox-blood when fate dealt the Flea a winning card. It so happened that the Huntsman was employed by no less a person than the King and so, as duty demanded, he offered the bloody trophy to his monarch.

As His Majesty took hold of the fox’s brush, the Flea took another leap and landed on the royal personage itself. He could scarcely believe his good fortune and supposed that his life would, from then on, be one of peace and tranquillity with unlimited opportunity to gorge on the finest blue blood in the land.

But it was not to be. The other fleas who had been born and bred to the royal life looked down their proboscises at a Flea who came from such humble origins as a rat in a barn!

It wasn’t long before the Flea was once again very unhappy with his lot in life and, after spending only a few days in the King’s armpit, decided that he needed a change of air. One morning he hopped onto the Royal Butler and thence to a Royal Serving Man and by a series of brilliant manouvers made his way down into the Royal Kitchen where he found an old, fat, grey Rat who lived under a flagstone in the Cook’s pantry.

And there he lived happily for the rest of his long life, earning great respect from the other fleas dwelling on the kitchen Rat, who thought him a very superior individual. He was accorded all the bogus esteem shown to a celebrity and his fellow fleas constantly begged and pestered him to recount stories of his many adventures in the world and, most especially, his intimate and minutely detailed memoirs of his life in the service of Royalty.