THE SLOTH WHO REFUSED TO BE RUSHED 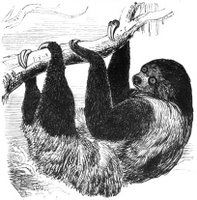 There was once a Sloth whom, everyone said, lived up to his name. He was, as the term ‘sloth’ suggests, idle, indolent and inactive, lazy, languid, listless and lethargic. Despite being permanently surrounded by animals that were concerned - day in and day out - with hustle and haste, the Sloth remained resolutely indifferent, even apathetic.

The other creatures had no time or sympathy for the Sloth’s slothfulness.

“Hurry up!” the Cheetah would yell every morning as he rushed by in a blur of whisker and tail. “You’ll miss everything that’s going on!”

“Where were you?” the Cheetah would laugh as he sped back at the end of each day. “You’ve no idea how many thrills and diversions you passed up on today!”

The Sloth never bothered to think of a reply because he knew the Cheetah would be gone before he could begin.

He sometimes wondered - briefly - what it was that the Cheetah and so many of the other animals found to do that was so essentially thrilling and diverting. He assumed it involved a lot of rushing and tearing about and no doubt a good deal of bounding and leaping as well.

No one stopped long enough to ask the Sloth how he passed each boring day or what he did to fill each monotonous hour.

Had they done so, the Sloth would have replied:

“I really haven’t done anything of importance… I woke early and hung from a branch pondering the way in which the early morning sun danced on the dew-sparkled grass.

“I watched a spider tirelessly weaving a web of gossamer fineness and a butterfly struggle free from its chrysalis, dry its wings and fly off into the forest…

“After a light lunch of another bunch of berries, I looked on as a platoon of ants transported a leaf that was one hundred times larger than themselves and a tiny bird peck its way out of the blind-dark prison of its shell…

“Following supper, I watched the hummingbird hover in mid-air and suck the nectar of the hibiscus flower and at sunset I gazed at the sky as it turned first gold, then crimson and, finally, took on the blue-black shades of the star-pocked night…”

And such, I regret to tell you, was the shamefully unfulfilled existence of the Sloth who refused to be rushed.

Mr Sibley, I really must berate you for your exceptionally poor mastery of timing.
These fables are excellnet, full of humour and a moral (you little Aesop, you!). They are totally enjoyable to read and would be great to tell if only I had seen them SIX YEARS AGO WHEN I NEEDED THESE STORIES FOR MY ASSEMBLIES!

By the way thanks for the card advertising your Radio 2 series in July that I received yesterday (9 August) - I'll backdate my diary immediately.