THE HYENA WHO WOULDN'T LAUGH 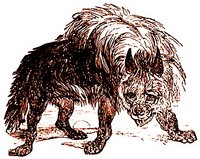 There was once a Laughing Hyena who, contrary to his name and the usual inclinations of his breed, never - under any circumstances whatsoever - LAUGHED...

This Hyena flatly refused to see the humorous side of anything and wouldn’t let his funny bone be even gently tickled.

When all the other hyenas were in their element, telling one another the funniest stories with the cleverest punch lines or the raciest double entendres and were rolling on the veldt with side-splitting hilarity, the Hyena who wouldn’t laugh still didn’t crack a smile, but merely wore a straight-faced expression that told the world that he was seriously not amused.

The other hyenas got bored with the Hyena who wouldn’t laugh and did their best to ignore the fact that whenever any of the rest of them told a joke, shared a gag or made a pun, this kill-joy merely shook his head, shrugged his shoulders and sighed heavily.

Then, one day, when the pack was sitting around cracking one another up with their usual funny anecdotes, something spooked a nearby herd of rhino. There were six of them - big, hefty brutes that were generously blessed with bone and brawn, but who had scarcely an atom of brain between them.

One second the rhino were grazing the grassland, mindlessly chewing the cud; the next, they were thundering here, there and everywhere, bellowing and snorting, crashing into one another and trampling anything and anyone in their path.

And in their path were the hapless hyenas, too busy laughing their silly heads off to hear the approaching tornado of hoof and horn.

It took less than a minute to leave the hyena pack limping around with broken legs, dislocated jaws, sprained ankles, strained backs and splitting headaches.

That was when the Hyena who wouldn’t laugh began to chortle and then chuckle, to giggle and then guffaw until he LAUGHED OUT LOUD for the very first time in his life. Tears streaming down his face, he fell on the ground and rolled hysterically about, clutching his sides in an agony of amusement!

One of the other hyenas, who had gained a black eye and lost most of his teeth, hobbled over and stood looking at what was now the only laughing hyena for miles around. “Why are you laughing?” he asked in great irritation. “You have never, ever, laughed at anything before.”

“That,” tittered the Hyena who wouldn’t laugh, with a smirk that widened into the widest of smiles, "is simply because there wasn’t anything worth laughing at before!”

Yours is the very first comment on this post -- three years to the day since I posted it!

Thank you, Shreyasi, I'm glad you liked the story!

that will be great for my hyena report and it's a cute story!

Found this story after Googling "stories about hyenas", since I realized that there are too many stories about bunnies.

Thanks Josh. Yes, the bunnies have no right to so much press-power! :)